In which Cady May discovers there are no rules to modular knitting.

This is a jim-whammy kinda cold. I won't whine, but I will say that it has affected my ability to think clearly, even about knitting, which is my default "comfort" mental state. Some folks curl into a fetal position, some rock back and forth, I calculate stitches and rows..
I had started an off the cuff, no pattern-no plan keyhole scarf with an idea to make it have a pocket in it for aromatherapy, and then I had a brain lock down.... 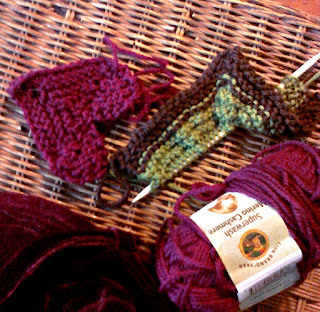 So, I was googling around in a coughing stupor, vaguely wondering if there are "rules" to modular knitting, specifically, if it matters if you have an odd or even number of stitches. Now, if I had not been sick, I probably would have been able to think that through, without googling..but it is what we do when we are miserable, I guess.

I was drawn into this post at The Girl From Auntie Blog, "So who invented modular Knitting" in which she talks about Virginia Woods Bellamy "invention" of the mathematical approach (and patenting there of!!) of modular knitting and I said to myself..."hey, wait a minute, I have this book!" and so I dusted it off  in excitement thinking that of all sources, this one would have a list of "rules" ((it was really, really dusty, I live in an old cabin, so actually, I wiped it off with dilute vinegar)) 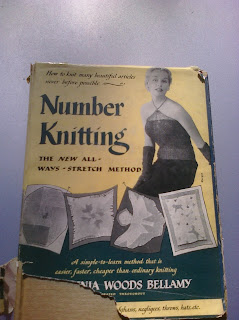 Shor nuff! it did, but she never said anything about odd or even numbers, nor does she even describe her decrease method (K2tog? sl1k1 psso? or what have you?) but I just love the models and the "look" of the '40s. I also like the subtitle "How to Knit Many Beautiful Articles Never Before Possible"
Wow.
Doesn't that sound wonderful? and all from the wonders of math!

All the patterns in the book are with small yarn on large needles so they are very stretchy and airy. She really impresses the "all direction stretch" of this method...Like this triangle turban... 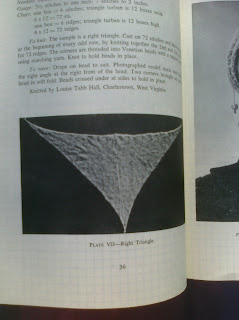 Which I got so excited about when I saw it modeled, and wondered just how you wrap that to look this cool, with the beads hanging down and all......... 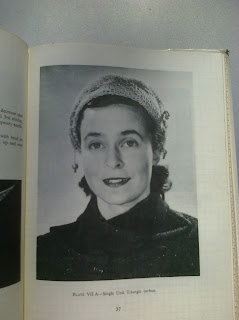 But this is what she says about that

"To wear Drape on the head to suit. Photographed model starts with bead on the right angle at the right front of the head. Two corners brought up and over the head in soft fold. Beads crossed under at sides to hold in place."

hmmmm...It will have to be knitted and tried on to make sense of that...que.

Meanwhile, back at the sick farm...I have a square and a heart knit for my keyhole scarf, lack just a little of the pocket, then I will resort to hybrid knitting (that is, I will slap it on the LK 150) to finish up the scarf part...now I am off to breath steam while trying to imagine how one "drapes to suit"
at October 09, 2010