Welcome 2012! I wish for everyone plenty of time for all their fiber projects this year.

New Spindolyns...
I have finally got the new spindolyns up on the website. After much experimentation, I decided on 4 different sizes, 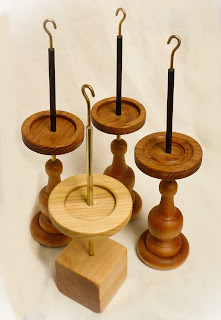 from smallest to largest; the (new) soprano, the melody, the concerto and the harmonic.
The mezzo has been enlarged a hair to hold a bit more, and the weight removed from the center so that it spins faster and then renamed the soprano (a recycled name, but it just made more sense)
The concerto is a bit fancier and a special thanks to Mary (FleeceFriend on Ravelry) for helping me with the name.

New Website
oh yes! (almost forgot) for some strange reason, folks in Germany get a 404 when they try and visit the www.knittinganyway.com website, even though it is up and running here..
So while I figure out whats up with that, I have put up a blogger page for them at
http://www.spindolyns.blogspot.com/
It could be that it has been up on the web since 1999 and was originally designed in Microsoft Frontpage, which of course now is totally outdated.
I have been "afeared" to learn a new software, but I think the time has come to start over, so if you are visiting and see anything weird, it is because I am trying to rebuild the original knittinganyway from scratch (wish me luck! : 0  and let me know if anything is totally wacky while you are browsing)

On Gift Knitting
Much has been written about knitting for others and the spiritual benefit it is for the knitter and the recipient. There are chemo caps, and prayer shawls, and afghans for afghans, and many, many other ways that knitters can contribute of their time and talent.
I was thinking as I knit a few dishcloths for giving away this year the difference between knitting for those we know and those we don't.
One of the intended recipients of a dishcloth that I was working on happens to be a "modern" young woman (an old fashioned phrase, I know, but I can't think of another way to say it) I had found some unknown, unlabeled, cotton  in my stash that was a perfect match to her kitchen curtains, and short on time, I wanted to do something personal for her.
I was thinking of her while I knit and it occurred to me, that unlike me, she mostly eats out, and if she rarely cooks, it would be to microwave something out of box, which she would serve most likely on a paper plate, or pop the dirty dish into the dishwasher.
With this dawning realization, it occurred to me that she might not "get" her gift. Oh, maybe she might recognize it as a dishcloth, but probably not that it was handknit, in a special pattern and in yarn that matched her curtains, and I kind of doubted that she would immedietly recognize the scrubbing value and niceness of a handknit dishcloth.
For just a bit I set it aside and worked on something else.
I thought of all the knitted things that would suit her better, for which I had neither the time, the yarn nor the money.
And that is when I realized, that sometimes, knitting for someone else is just because you are thinking of them, and it doesn't have to "fit", it is the thought(s) that count, the loving thoughts of that person that are looped into each stitch, whether they know it or not.
at January 01, 2012 2 comments: