plying on the spindolyn (a little more about)

“I am wondering if anyone has tried plying with two spindolyns. I'm thinking that I could spin singles on both spindolyns and then ply directly from them onto another spindle. That would eliminate winding the singles off the spindolyn. I would probably need to have beanbags for both spindolyns so that they wouldn't tip over. It seems so simple that I'm sure someone must have tried it. Do you know if this would work well? “

The answer is yes, it can be done and is a method I use often, but I have not talked about it much because I assume that most people don’t have 3 spindolyn bases and a beanbag for each (though many spinners do have one base and two or more extra spindles to go with it) Also, plying is one of those “best practices vs. whatever get’s it done” skills, and I don’t want to advocate a method that might get the “plying police” after me. So with disclaimers included (and following) here is one way that I ply off of the spindolyns. 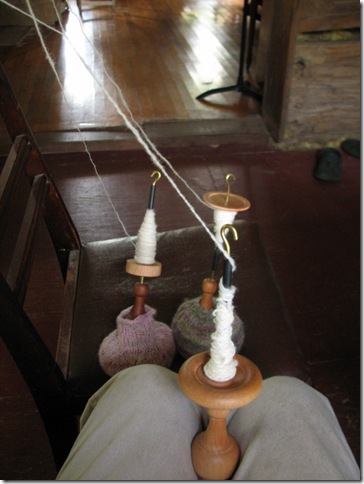 In the picture above, I have placed the spindles on a chair in front of me, so that you can see them in the photo, but normally, they would be on the floor in front or to the side of me. The more distance you have between your source of singles, and the plying spindle, the more you will be able to use your hands to control the twist of the yarns coming together. The bases are sitting propped in the beanbags so that they lean on an angle and the yarn can feed off of the cop without getting caught on the hook. Also, I normally spin in a kicked back position, with the spindle more stuck in the crook of my knee, but in order to juggle the camera in one hand and get everything else in the view finder, I have to sort of place things awkwardly.

Another disclaimer, yes, that is a high whorl spindolyn you see in the photo. It is a prototype that I have been testing, to be called the “Octavia” It does spin nicely, but it’s drawback is does not feed off as nicely in this arrangement as the other spindolyn you see in the picture, which is also another prototype I am testing (possibly to be called the “piccolo”) But y’all aren’t supposed to notice those yet<g> 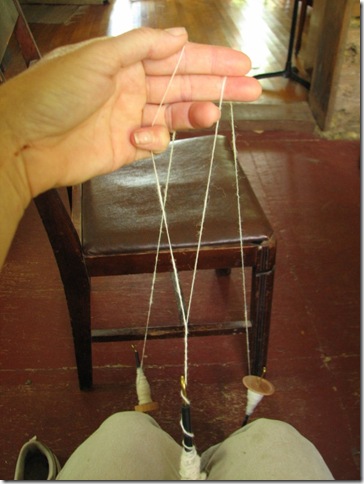 Here you can see how I hold my hand when plying, with each strand tensioned as you see, to give me control of the angle and amount of twist in the ply.

Now for the other disclaimers: "best practices in plying" encourage you to wind off your singles so that you can rewind them in a tidy and consistent fashion to better prepare them for proper plying. Also, some even wind, then re-wind one again, so that the two sources have two different directions of end presentation imitate the "ply back upon itself" natural tendency of overspun.

But, sometimes, you are not after perfection, you are after the "git er done" satisfaction.

With that approach in mind, I also have been working on a lazy kate type base to put the spindles in for plying so that you don’t have to have multiple bases, sort of like this. 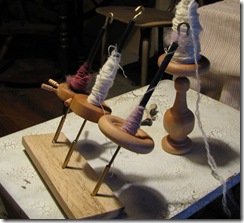 But it still needs the following: for me to find an affordable and nearby source for wider wood. The wooden base has to compromise between stability and portability, as well as shipping weight. It needs more experimentation on the correct angle, and some sort of wire guide (which might not be as necessary, if i don’t release the high whorl spindolyn, it is the recalcitrant one that really needs a guide.)

And you thought I was just laying around on the beach idle this summer?

Meanwhile, all the R and D has been conducted with some old (maybe 9 years?) drum carded Romney fleece I found in a bag in the bottom of an antique trunk of mine. It is from my old favorite sheep of my long ago and misty past “Maggie” and I still like spinning her the best.

So several weeks back (well before the independence holiday) we decided that what we badly needed was a getaway, a quick overnight vacation. Camping, on the Cumberland River, and a day of rest, relaxation and kayaking. We threw tent, food, bedding and the inflatable kayaks in the back of the station wagon, checked the availability of our chosen campground from the Army Corp of Engineers website and headed out.

I did not have any particular spinning or knitting project in progress that I was emotionally involved in, and didn’t know what to take, so spur of the moment, I distractedly tossed in some stuff off of the shelf of my office into the closest available vessel, which happened to be an insulated cooler/picnic tote and tossed it in with the lifejackets and snorkels. 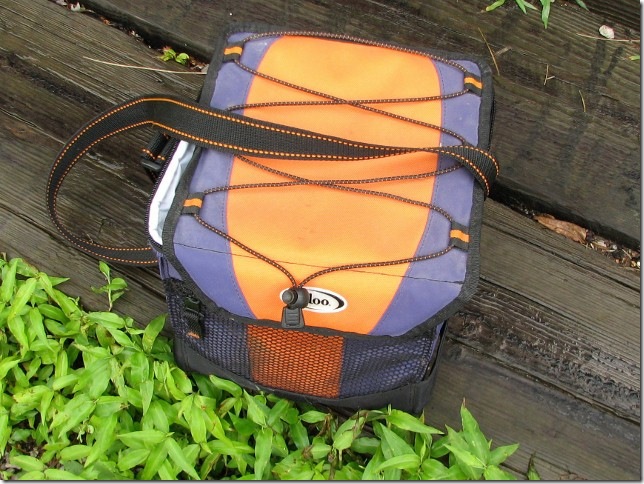 I won’t get in to the horrors of bureaucracy, ill mannered people and corrupted campground hosts, but the bottom line was that the hosts were illegally saving all the “good spots” for friends of theirs and even though we had chosen a “no reservation, walk in only, first come first serve day” to camp, we did not end up staying.

It was all for the best, as we spent a leisurely afternoon kayaking in an isolated cove, bird-watching, instead, and we were able to get back home and get up early to start back to work refreshed, which was the point, anyway.

Just as quickly as we packed, I tossed all of the camping gear back into the barn and the small stuff back into the corner of the cabin, and there sat the cooler with the fiber supplies in it, forgotten. Until yesterday. While looking for my tall, snake and chigger deterring rubber berry picking boots, I noticed the cooler and said to myself…hey, maybe I could pick blackberries into this, wonder if the stains would wash out…

Imagine my surprise upon opening the zipper only to find this great stash of fiber fun possibilities! 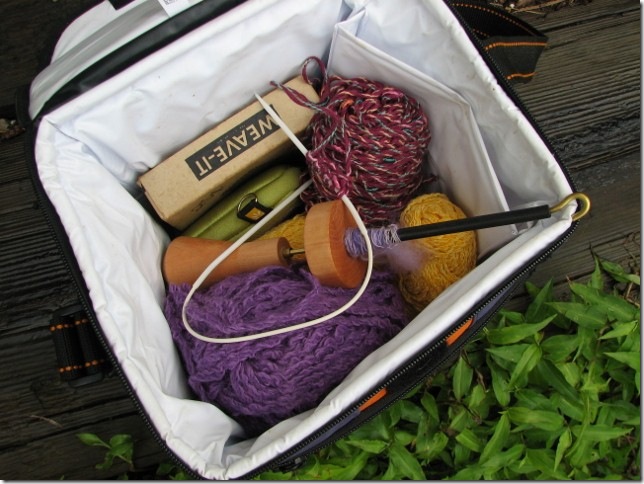 I set the cooler beside my evening chair, and last night, I had this lovely toy box all ready to dive into.

Maybe I should hide my projects intentionally from myself (instead of accidentally) because I got a lot of “cheap thrill” mileage out of the re-discovery of the contents.

in the pink (or not)

Recently I was surprised at the mailbox when I opened a note from my sister Mary and nearly spilled the lovely pink contents out onto the gravel drive. 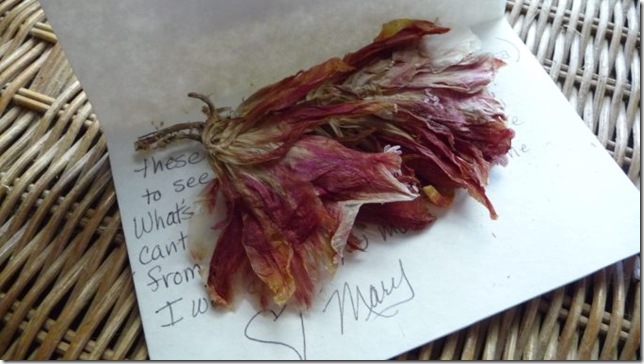 It turns out they were flowers from her orchid cactus, that she suspected (from a spill, I imagine) that they might contain a dye. Being ever inquisitive and generous, she saved them and mailed them on for my pleasure and experimentation. 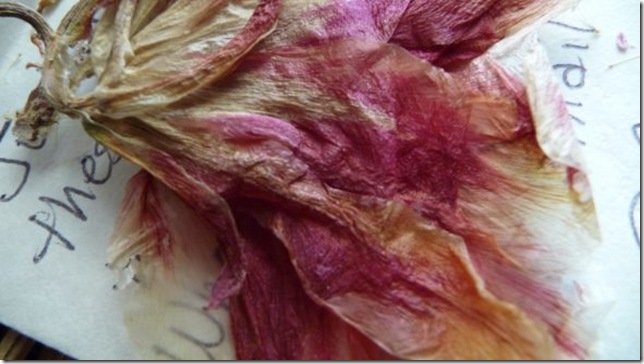 They were so lovely, that I promptly dropped them in a jar of water for a “solar tea” type dye experiment. Immediately the water turned a nice shade of pink, like the color of red zinger tea. 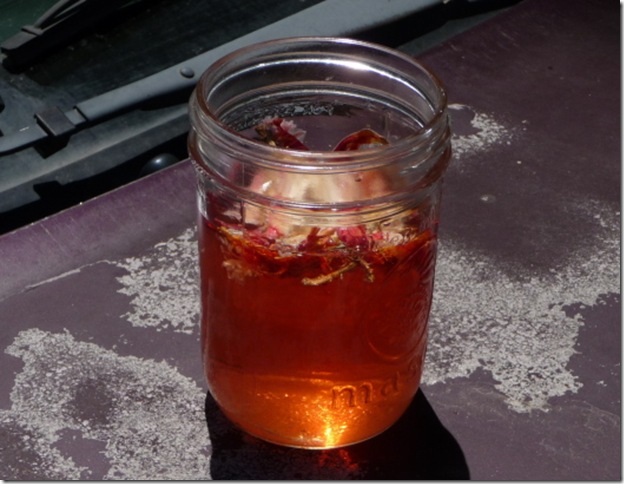 My sister Mary is always full of surprises. She is not a fiber artist, but a “real” artist and story teller. Her newly spruced up website and blog at “Earththemes Studio” only reflect a fraction of her artistic skill in interpreting her love of nature and a good story, take a little peak and a little visit there and enjoy.

Meantime, back at the dye jar. I thought that I remember that hibisicus (a fugitive dye) might be mordanted to improve its fastness a tad by the use of alum. And I thought (without any information or research at all) that maybe because the color looked so similar that I could just pop a little fleece into some alum water and then into the magic red jar and voila!

I will spare you the sad photo of the moment that I put the mordanted fleece into the red liquid and it immediately turned an ugly, pale mustard yellow. Then it rinsed to white, which was probably a blessing.

Now I am wondering about hibisicus and hollyhock (not that this was either of those, or even remotely related, and not that my hollyhocks are going to have enough blooms to fiddle with this year) but curiosity is addictive.