We are not daintily perspiring here, we are dripping.
Frequent cold cloths to the face have been necessary in order to not just flat out keel over﻿.
I have hit the age where my facial skin is now "tender" (awww)
I am also at the age where I found myself griping like an old grouch when I went to pick up a couple of new wash clothes to replace my old, holey wash (face) cloths...."sheesh! they don't make them like they used to!"
The wash cloths I found were either too thick and heavy to ever dry out in our southern humidity, or they were just plain scratchy.
I ask you,  how does cotton get scratchy? I think there is more in that cotton than just cotton..
I guess labels these days lie, just like politicians
On the very day that I picked up a ball of cotton to knit my own washcloth, a knitting friend of mine emailed me, saying she wished people would knit something more challenging than dishcloths.
Unbeknownst to her, I felt duley challenged.
I made it more difficult on myself by promptly misplacing my yellow dishcloth yarn, found an alternative (but ugly) brown, cream and green ball of peaches and creame, and scoured Ravelry for patterns that offered some spicyness of language when you loose your place in them.
I picked 4 patterns from Ravelry, and present 3 here in order of most challenging to least.
I began with the pattern called "vortex six" by Rebecca Hudson..she has a series of neat vortex dishcloths..meditative, but I admit, a bit more challenging in the heat than I was looking for, I stopped mine after 5 rounds, instead of 6, cause the yarn was ugly (photo A) and I was hot.
Mine does not look like hers, I will go back to this pattern in cooler weather and with two colors of yarn at a later date. 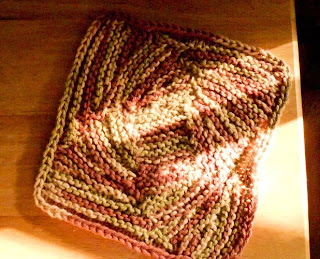 photo A
Next, I decided that some thinner cotton in a bit more open stitch would dry quicker in the terrible humidity, and got this yellow varigated ﻿mercerized cotton purchased from my LYS Traditions in Lafayette, TN, for which I promplty lost the ball band or I would tell you the brand....I like the way it knit up, but the varigation had lovely orange, yellow, white and ....gray??  this would be very pretty if they left out the gray varigation, as it makes the cloth look "pre dirtied" However, the mercerized actually does make a nice, soft, quick drying wash cloth.
The cloth is smaller than it looks, because the rubber ducky is actually a "mini ducky" The pattern is the Petal Dishcloth by Susan Esser, it is knit list archived. It was a little easier to follow whilst one is daintily dabbing ones forehead with the previous cloth.
﻿ 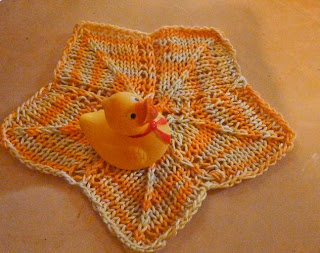 I totally screwed up on this last one, but it is a great pattern, easy peasy, it is the Starfish Cloth by Dione Reed of Sew Funky. I intentionally used a little bigger needles, thinking quick drying again, but I went a little too far and it flops around like a jelly fish rather than a starfish. I also decided that I wanted it to be anatomically correct (to a starfish, that is) and so only made 5 arms rather than the 6 the pattern calls for, so fudged the rows a little randomly to accomodate than, and one of the arms looks like it was whacked off and grown back, which is also biologically correct to starfish, so that made me feel closer to the ocean, which just the thought of those breezes has a cooling effect, so that was worth it.
It is also not as big as it looks in the photo, as the hat is very small..You could, however, soak the cloth, squeeze out most of the water from the middle, drape it over your head and let the drips come down the starfish arms for a cooling effect....? 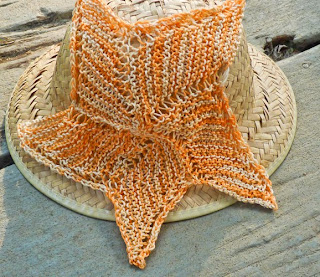