Back on the barstool again

Well, it’s not exactly a barstool, but a tall stool in my woodshop that I can sit on for brief spells to run the power tools to make the spindolyns. I have found that I can prop my broken foot in its ugly boot cast into the trash can to keep it kind of elevated. You still have to walk some, to move from this tool to that, and of course, back and forth to the woodshop out in the mule barn, so the amount of time is limited, when you are supposed to actually be staying off of it all-together.
But I told you that to tell you this; some progress is being made(!) and that cheers me up. I am about half way caught up, and I would estimate the turn around time on current spindolyn orders is going to run between 2-4 weeks, depending on how well the healing goes.
Funny thing about that stool. I picked it up at an estate sale for a couple of bucks, because it was taller than your average stool, and a lovely retro creamy yellow metal and I thought it would make a great fern stand on the front porch. But then when I was unloading it from the back of the truck, I realized that it was really very heavy duty and larger than I thought with a wide flat seat, and decided it would make a great stand in the shop for my belt sander. But then when I got it out to the shop, I never got around to putting the sander on it, because I started using it alternately as a table for setting my water bottle on, making notes or sketches, or for sitting up on when my feet got tired. Now I wouldn’t trade it for anything, wish I had three of the the same thing, because it is a perfect tall height and sturdy size.
I do have a cheapie wally world folding stool in the kitchen to sit on while doing dishes during my foot convalescence but it is really too short and awkward to reach the dish drainer, and dishwater runs back down to my elbows. This got me to wondering about just what is a “standard” stool height, and I discovered after googling bar stool sizes that there several heights, starting with dining height, then counter height, then bar height, then tall bar height, then spectator height, which is the tallest. The other thing I learned is that bar stools are expensive, very expensive. Something to watch out for at yard sales, in case I was to happen to get old, or break my foot again or something.
Meanwhile, back in the shop, there have always been wren’s who make nests in the mule side of the barn, but not generally on the shop side. But since I have been absent so much, one has moved in and made a nest up on a high shelf. She is not real happy with me for coming back to work. 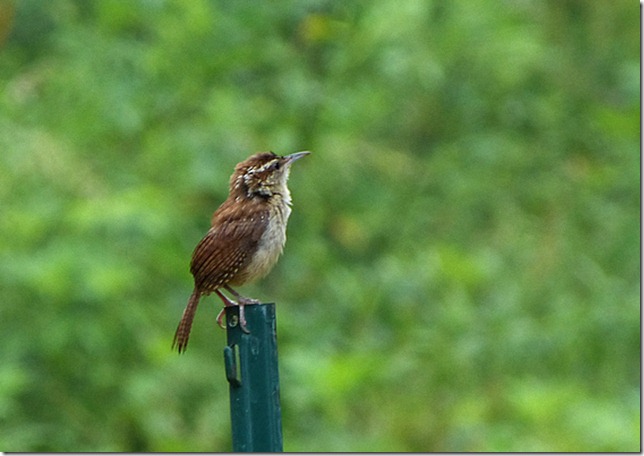 Well, I was going to entitle this post "I take it all back" (being too hot to spin, that is) but then a series of unfortunate events has conspired to make me fall quite behind, so I need to explain that first for any customers that might have concerns.

First, for the month of June, middle Tennessee did not have a single day that was below 100 degrees. We had three days that were 109, but mostly, it hovered around 104. I know that everyone has been hot, so I don't want to sound like a whiner, but my wood shop is in the old mule barn, which has a metal roof and metal sides, has no insulation and no ac. It is, actually, open to the elements and hotter than an easybake oven in the afternoon. At least this summer. In summers past, it was pretty comfortable, and I just made sure to do most powertool work early in the mornings.

But his extreme heat limited the hours I could work in the shop on spindolyns, even with fans going. Those few cool hours had to be shared with all of the farm chores, which have been compounded by the drought. The drought has meant that the animal and garden water has had to be hauled, and they needed watering three times a day due to the heat. Our household water has had time consuming complications, too, so I had slipped behind, time wise, but was feeling confident that this past weekend, with the predicted cooler weather I could catch up.

Good news~ we are getting rain, and it has cooled off and I am so thankful!
Bad news~ Before the rain started, I was up the creek bed looking for a possible additional water source and slipped and my foot went between two rocks and I fell backwards and broke my foot. It is, well, I won't go in to it, but it isn't great.

Anyway, as soon as it is safe to be up and about and back to the shop, I am sure I will catch up, I just wanted spinners to know that there has been and will be a delay.
Meantime, I have some lovely, half done specialty spindles that I can polish on.....just might be a few days before I can get some help or get back out to the shop and get the bases drilled and brass cut to finish them...and then there are those outstanding orders that are setting on the work bench half done. Well, frankly, it just kills me.
I just don't handle this sort of thing well, I really, really hate to know there are people waiting on their spindolyns, and I never was a "sit around when there is work to be done" sort of person.
Fortunately, an elevated foot does not prohibit spindolyn-ing or knitting, or sketching new designs....all I have to do now is work on the anxiety produced by guilt at being late.
at July 10, 2012 5 comments: