Winding on for Tangle Free Plying from a Spindolyn

Plying can be fun! (really) It can also be very frustrating, whether you are plying back on to a spinning wheel from bobbins on a lazy kate, or plying from wound off yarn back on to a spindle, there will be some tangles and consternation. How well you prepare the singles (on the wheel or on a spindolyn) can really help reduce both.

At the top of the photo below is a good example of both a poorly spun and poorly wound spinolyn of yarn, when compared to the lower spindle. I have been digging out old, full spindles to test the prototype of the new plying apparatus that you can see in the photo. As I have been doing this, I have noticed that the way the spindle was wound made a huge difference in how often I had to stop and untangle or "uncatch" the yarn so that it could flow freely. The lower spindle in the photo flowed smoothly and never once tangled or snagged. The upper one was so frustrating that a couple of times I nearly just gave up and cut it off. 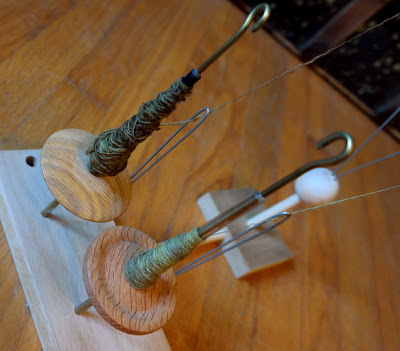 So what is the difference? Besides the unevenness of the spin, what made the unevenness of the wind? It helps to imagine the way yarn is wound onto a spinning wheel, first.  On a wheel, there are hooks along the bobbin, and when you spin with the yarn forming over a hook,  under that hook, it builds up a little mound, and you move it on to the next hook before the mound gets to big. If you build up a big mountain under that hook before you move on, then the winding on yarn will slump down the sides of that mountain as the next one builds, and you will have some yarn that should be above the layer, trapped underneath. This trapping underneath is a $#%*$ when you go to unwind the bobbin.
Thinking of it this way, as building layers needing to stay on top of each other so they can wind off again smoothly, helps you stay consistent.  Winding on firmly is important for the same reason. In the upper photo, it is apparent that the yarn was wound on too loosely, but also that the layers were built up in spots up and down the shaft, allowing for slumpage and "underlayering".
I seem to have the best luck keeping my layers seperate with building a cone shaped cop on the shaft, but I would love to hear opinions on this, especially those winding an oval shaped cop.

I have often thought that in the spindle spinning world, the spindolyn could be a great way to ply, because it can go slowly and is easier to control. But how to get the singles would off and tidied up and then delivered back to the spindolyn requires a bit of thought.

Many people wind the singles off onto a ball winder, nostepinne, regular ball, or ball of yarn around a felt ball. Then these ball are put into two containers to keep them separate while you ply.
To help with this, I came up with the ply baby bracelet, which I what I use.
But I keep thinking that it would be better to have an apparatus that would hold two or three spindolyns so that you could ply directly off of them, and am prototyping this "plying apparatus" right now (you can see a part of it in the photo) Also, it would be better to have an even bigger than the harmonic spindolyn, an am still working that out (wish me luck on both)

So the take away here is wind on with winding off in mind.
Enjoy your plying and your finished yarn, however you accomplish it!
at August 26, 2017